This piece of clothing was going to be a small test of what I could achieve using Marvelous Designer and at this point I had learnt the limitation of the program. I know that the seams wont efficiently export for ZBrush use meaning I don’t need to be extremely neat in my pattern design as the seams can be redrawn in ZBrush.

Fig 1 shows my original concept for my character, one of the key things I want to keep in from this is the collar and the under layer that can be seen in grey around the edges of the jacket. I know that it would be hard to actually keep the under layer if I made it in Marvelous Designer and therefore I will add it later on in the development through Maya.

Since this was my own design, I didn’t want to use too much reference and I wanted to see if I could create something realistic from my mind. Fig 2 shows my first part of the pattern for the jacket, since it was sleeveless I made the actual arm holes straighter as these sort of jackets usually hang.

Weird enough when I did search for reference material, I found a jacket which was similar in design to my concept event though it wasn’t used as reference at the time. This was handy as a guide though. 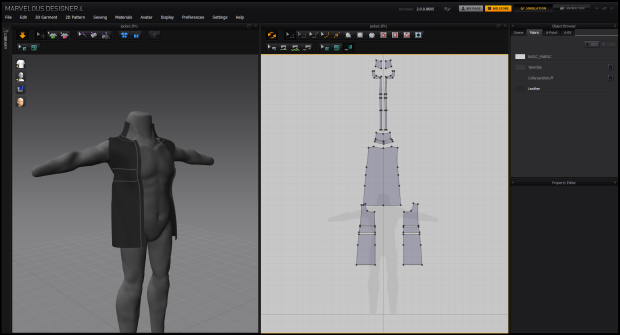 I created the collar by making a piece of fabric that would wrap around half of the collar then as it is rendering in real time, it would press against the neck of the model, making it stay upright. This worked perfectly and I then decided to keep this as my final model, deciding to add more details and modify the topology more in ZBrush where I have much more control.

Instead of taking this model straight into ZBrush like I did with the rest of the clothing, I chose to bring it first into Maya so I could create the under layer that I have previously mentioned.

Since the model is usually flat when it comes out of Marvelous Designer, I first decided to extrude all the faces inwards, this made the object have a full 3D geometry that I could work with and I also made the mesh thicker than the shirt due to it being leather. Luckily for me Marvelous Designer places a nice edge on its meshes meaning I could easily select the edges under the edge of the mesh and then just extrude an under layer out with relative ease. Fig 5 shows the new addition of geometry I had created. 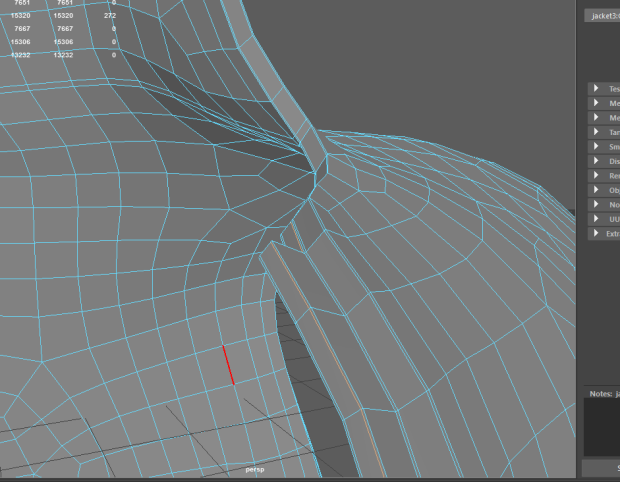 Like with the boots, I added more edge loops around parts of the mesh that I wanted to keep harder edges on, this is because I know I will be sub dividing this mesh in ZBrush which will cause the smoothing effect so adding these edge loops will cause the mesh to not deform. I did this around the opening of the jacket, the under layer of the jacket and around the base of the collar so it wouldn’t just because a curved collar. 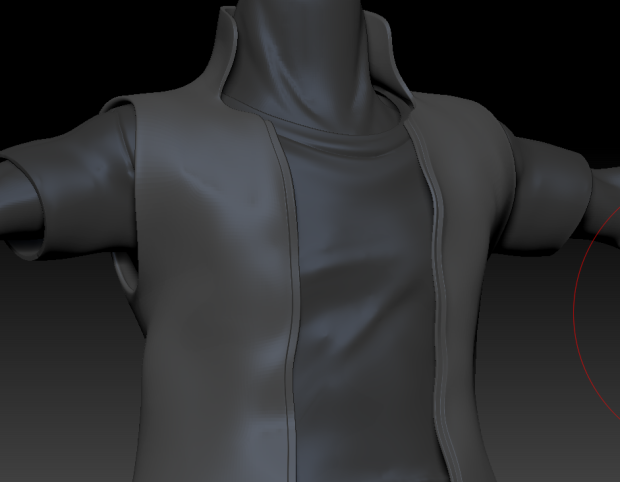 First thing I tested was how the model would look when it was subdivided and because of my previous precautions the model worked well and the hard edges that I needed stayed hard.

Since the mesh was plain when I imported it into Zbrush, I decided to add some extra details using the dam standard brush, adding some seams on the chest which are more for design than practicality. To make the mesh look a bit more interesting I created a sort of thicker leather mesh that lays just over the shoulders and the back, again no practicality but more for the style.

I gathered together a few pieces of leather based reference so I could emulate the material through its creases in case I didn’t have enough time to create the actual textures.

I noticed that an on going theme was big pronounced ceases that would be surrounded by quite a bit of space, this is due to the fabrics strength as it pushes itself in and out of creases. When I went into doing my own creases for my jacket, I chose to do these big open spaced creases too and see what I could achieve. I also noticed that when there is no build up of fabric, the actual fabric just bumps a bit but is generally smooth and crease-less.

I use the lesser strength Selwy brush I recently downloaded and just played with the surface of my mesh until I found something I was happy with.

Fig 12: Thick leather on my model

This was the result I ended with, overall I think to looks good, I don’t want to over complicate the creases due to creases being less prominent on the Final Fantasy 15 (my clients game) clothing as can be seen in Fig 13.

My clothing is really lacking in the details which the current games character have in their clothes but this is due to my inexperience and my lack of time, game companies usually have dedicated people modelling characters and clothing separately whilst I am taking it on as one man.

For a little more detail, I added a pocket on the front of the jacket using the insert geometry tool again and then just adding some extra detail using ZBrushes available tool, more notably the stitch tool which emulates stitching but requires an extremely high sub division level to look right.

I added basic colours to my mesh parts using ZBrush Poly Paint which allows you to draw colours onto your models vertex points. I just quickly used a fill to fill the entire models just to differentiate them a little.